SI Johannesburg Soroptimist International Johannesburg Club was chattered on 8 June 1963 The club is committed to empowering women and girls to achieve their best despite their circumstances.

The main club projects are:

Sithabile Child and Youth Centre is a safe haven and home for 38 children cared for by the Msezane family of whom Thabisile and Nandi are SI Johannesburg members, the latter being the president. The children were mainly home for 2020 academic year, except the 2 matriculants who passed well with university entrances. The year has been very difficult not only caused by the virus. Solly Msezane has been in and out of hospital and Thabisile has also not been well. Nandi had her laptop and cellphone stolen .The education of the primary children at home has also been a strain. They are using the Mobymax programme to help the children keep abreast of the school curriculum. The problem is that they do not have enough computers for the learners. Nandi secured food parcels through her involvement with the C19 People’s Coalition and then co-convened the Gauteng Food Security group, which distributed 15,000 food parcels and 7500 meals to families and individuals. She also co-convened the Food Working Group of the C19 People’s Coalition, where experts and activists discussed issues relating to food and agroecology. The focus has shifted in conjunction with other organisations to help communities to establish organic gardens to provide vegetables for community kitchens. Sithabile has not been able to fully replant their vegetable garden as the irrigation system was burnt in a fire from the neighbouring property. 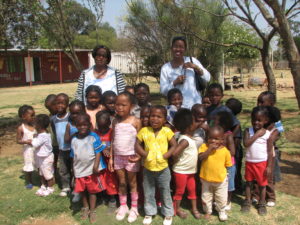 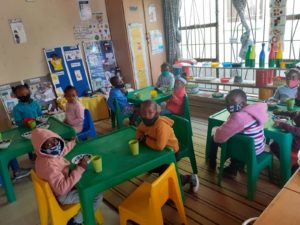 Keeping the Girl child in School

The project is to connect with mainly high school girls in the informal settlements in the Putfontein area to provide them with sanitary pads and bras. Nandi Msezane then formed a group to discuss topics that were topical or were what they were concerned about. Once the pandemic is over these talks will probably resume. It is noticed that 20% of female learners will not return to their studies as a direct result of the pandemic due to the burden of care in households and the gendered impacts of the epidemic.. On Woman’s day 2021 Warner Music South Africa donated approximately R16.000s worth of bras to the ZABRA project and these will eventually be distributed to communities in Ekurhuleni and the potential shelter for the homeless LGBTI persons in Gauteng. Malaika Minyuku-Gutto has been facilitating a programme to help address racism in schools. Multiple online talks on the issue of racism in schools and black girl activism have taken place with the intention of continuing the conversations both online and face-to-face after the pandemic.

SI Johannesburg club has been supporting the Diepsloot Pre-primary school since1996 in various ways, and recently by providing educational material and equipment. The club has also helped the headmistress, Mary Pule attain the required degrees to be able to hold the post. The Pre-primary was closed from April 2020 due to the Covid 19 Lockdown and only could re-open on 24th August 2020. The club helped with getting the school Covid compliant with the necessary masks, sanitizing stations and thermometers. In January this year the Department of Education removed the grade R teachers to the primary school leaving Mary with the younger children only which was not viable. She has combined schools with another one in the area, Mother’s Love run by Grayce Masinga who was a member of the SI Jhb club in2013/2014. There are now 60 children together with the children from Mary’s school. Mary is now concentrating on a feeding scheme for the creches in the area using her empty facility. She has found a source of fresh vegetables and meat. Currently she is feeding 2 creches and 10 families and is going to expand once she has upgraded her kitchen.

The National Children’s Theatre was not given any money from the Department of Arts and Culture, so Moira Katz had to find ways of raising funds just to pay staff and keep certain activities going. They taught 40 learners on line instead of the usual 150 learners. The NCT made an outdoor theatre on their property with paving and large drums. Plants supplied by Carole Hadfield were used to beautify the area. During lockdown level 1 the theatre managed to teach the children outside as well as stage several productions inviting audiences to bring their picnic blankets and watch the shows. This was successful until recently when the theatre had to close again due to the increased level of Lockdown.

Sidebar
Start typing to see products you are looking for.
We use cookies on our website to give you the most relevant experience by remembering your preferences and repeat visits. By clicking “Accept All”, you consent to the use of ALL the cookies. However, you may visit "Cookie Settings" to provide a controlled consent.
Cookie SettingsAccept All
Manage consent

This website uses cookies to improve your experience while you navigate through the website. Out of these, the cookies that are categorized as necessary are stored on your browser as they are essential for the working of basic functionalities of the website. We also use third-party cookies that help us analyze and understand how you use this website. These cookies will be stored in your browser only with your consent. You also have the option to opt-out of these cookies. But opting out of some of these cookies may affect your browsing experience.
Necessary Always Enabled
Necessary cookies are absolutely essential for the website to function properly. These cookies ensure basic functionalities and security features of the website, anonymously.
Functional
Functional cookies help to perform certain functionalities like sharing the content of the website on social media platforms, collect feedbacks, and other third-party features.
Performance
Performance cookies are used to understand and analyze the key performance indexes of the website which helps in delivering a better user experience for the visitors.
Analytics
Analytical cookies are used to understand how visitors interact with the website. These cookies help provide information on metrics the number of visitors, bounce rate, traffic source, etc.
Advertisement
Advertisement cookies are used to provide visitors with relevant ads and marketing campaigns. These cookies track visitors across websites and collect information to provide customized ads.
Others
Other uncategorized cookies are those that are being analyzed and have not been classified into a category as yet.
SAVE & ACCEPT